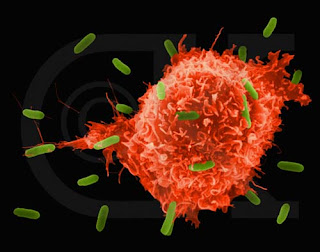 SOURCE
ScienceDaily (July 17, 2009) — Infectious disease specialists at UT Southwestern Medical Center have mapped the gene profiles of children with severe Staphylococcus aureus infections, providing crucial insight into how the human immune system is programmed to respond to this pathogen and opening new doors for improved therapeutic interventions.
In recent years, much research has focused on understanding precisely what the bacterium S. aureus does within the host to disrupt the immune system. Despite considerable advances, however, it remained unclear how the host's immune system responded to the infection and why some people are apt to get more severe staphylococcal infections than others.
By using gene expression profiling, a process that summarizes how individual genes are being activated or suppressed in response to the infection, UT Southwestern researchers pinpointed how an individual's immune system responds to a S. aureus infection at the genetic level.
"The beauty of our study is that we were able to use existing technology to understand in a real clinical setting what's going on in actual humans – not models, not cells, not mice, but humans," said Dr. Monica Ardura, instructor of pediatrics at UT Southwestern and lead author of the study available online in PLoS One. "We have provided the first description of a pattern of response within an individual's immune system that is very consistent, very reproducible and very intense."
The immune system consists of two components: the innate system, which provides immediate defense against infection; and the adaptive system, whose memory cells are called into action to fight off subsequent infections.
In this study, researchers extracted ribonucleic acid from a drop of blood and placed it on a special gene chip called a microarray, which probes the entire human genome to determine which genes are turned on or off. They found that in children with invasive staphylococcal infections, the genes involved in the body's innate immune response are overactivated while those associated with the adaptive immune system are suppressed.
"It's a very sophisticated and complex dysregulation of the immune system, but our findings prove that there's consistency in the immune response to the staphylococcus bacterium," Dr. Ardura said. "Now that we know how the immune system responds, the question is whether we can use this to predict patient outcomes or differentiate the sickest patients from the less sick ones. How can we use this knowledge to develop better therapies?"
Researchers used blood samples collected between 2001 and 2005 from 77 children – 53 hospitalized at Children's Medical Center Dallas with invasive S. aureus infections and 24 controls. The control samples were collected from healthy children attending either well-child clinic or undergoing elective surgical procedures. Children with underlying chronic diseases, immunodeficiency, multiple infections, and those who received steroids or other immunomodulatory therapies were excluded from the study.
The children ranged in age from a few months to 15 years and included 43 boys and 34 girls. Those with S. aureus infections – both methicillin-resistant (MRSA) and methicillin-susceptible (MSSA) – were matched with healthy controls for age, sex and race. The researchers also characterized the extent as well as the type of infection in each patient to make sure that the strain of bacteria didn't influence the results.
Dr. Ardura stressed that more research is needed because the results represent a one-time snapshot of what's going on in the cell during an invasive staphylococcal infection.
"The median time to get the blood sample was day four because we wanted to make sure the hospitalized children had a S. aureus infection, and its takes four days to have final identification of the bacterial pathogen," she said.
The next step, Dr. Ardura said, is to study those dynamics in patients before, during and after infection. They also hope to understand better how various staph-infection therapies affect treatment.
"This is a very important proof-of-concept that the information is there for us to grab," Dr. Ardura said. "Now we have to begin to understand what that data tells us."
The work was supported by the National Institutes of Health, the Center for Lupus Research and the Baylor Health Care System Foundation.
Adapted from materials provided by UT Southwestern Medical Center, via EurekAlert!, a service of AAAS.
Pubblicato da oloscience a 02:19