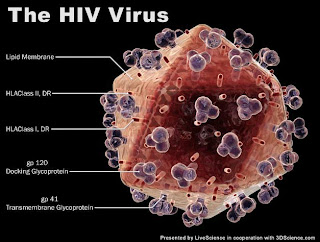 ScienceDaily (June 27, 2009) — Scientists at the Gladstone Institutes of Virology and Immunology (GIVI) have found another clue that may lead to eradication of HIV from infected patients who have been on antiretroviral therapy. A real cure for HIV has been elusive because the virus can "hide" in a latent form in resting CD4-T cells. By understanding this "latency" effect, researchers can identify ways to reactivate the virus and enable complete clearance by current or future therapies.
Researchers in the laboratory of GIVI Associate Director Eric Verdin, MD have found that methylation of cytosine in the DNA of infected cells is associated with HIV latency and that inhibition of DNA methylation causes the reactivation of latent HIV. These observations offer a potential new strategy for inhibiting HIV latency and reactivating the virus. The discovery was reported in the current edition of PLoS Pathogens.
"While HIV-1 latency is likely to be a multifactorial process, we have shown that inhibiting the methylation of the provirus contributes to an almost complete reactivation of latent HIV-1," said lead author Steven E. Kauder.
The research team, which also included scientists from the University of Utah and Stockholm's Karolinska Institute, developed in vitro models of HIV-1 latency in T cells that harbor a full-length HIV genome. The provirus in the cell lines also encoded a fluorescent marker to illuminate HIV-1 transcriptional activity.
In addition to finding that DNA methylation is a mechanism of latency, the scientists also discovered that a host protein, called methlyl-CpG binding domain protein 2 (MBD2) binds to the methylated HIV DNA and is an important mediator of latency.
"Interfering with methylation greatly potentiates the reactivation of HIV," Kauder said. In this study, the researchers found that the drug 5-aza-2'deoxycytidine (aza-CdR) can inhibit HIV methylation and cause the virus to reactivate.
"Combined with other areas of our investigation into HIV latency, this research provides important new knowledge about the process and opens many new pathways for future study," said Dr. Verdin, senior author of the study.
The research team included Alberto Bosque and Vicente Planelles of the University of Utah and Annica Lindqvist of Karolinska University. The study was supported by the National Institutes of Health
Eric Verdin's primary affiliation is with the Gladstone Institute of Virology and Immunology, where his laboratory is located and all his research is conducted. He is also professor of medicine at the University of California, San Francisco.
Adapted from materials provided by Gladstone Institutes, via EurekAlert!, a service of AAAS.
Pubblicato da oloscience a 00:14